What is an anti-election protest? 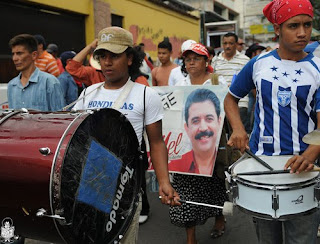 If you guessed terrorism, then you are able to anticipate the de facto regime's security forces better than I can.

An article in today's La Tribuna details the plans the National Police and Armed Forces have to deal with possibility anti-electoral protests, based on a joint press conference. (Wonderful to have such accessible security forces...)

Their immediate threat was to arrest members of the Frente de Resistencia, for what they said were threats to take over buildings, destroy political advertising, and disturb the public peace with noise. These crimes, they said, would be met with arrests.

As ever with the de facto regime, they provided citations of what they claim as the legal grounds for their threats. Now, it seems the Frente is a bunch of potential terrorists:

They based the preceding on Article 336, number 6 of the Penal Code, which says: they commit the crime of terrorism, who with political ends attempt against the security of the State executing any of the following deeds: Whoever organizes bands, teams, or armed groups that would invade or assault populated places, hospitals and churches, among other private and public places, will be sanctioned with imprisonment of 15 to 20 years....

That does seem the first place to go for dealing with peaceful protests, doesn't it?

But wait, there's more: the fiendish crime of noise, they noted, is punishable under

The article ends on a more disturbing and less clownish note; after asserting that people do have the right to demonstrate, as long as the apply to do so first, they aired a paranoid fear that "the left" was threatening to kill members of the military and police.

Oh, and the picture included here? The caption reads,

(The people who walk around making noise and asking that suffrage not be exercised, will be accused of terrorism.)

Somewhat more extreme than the actual police threats, which would not seem to relate at all to bands demonstrating and playing drums. But then, it would be too much to expect one of the pro-coup papers to actually base their captions on what their own report says, when making things up is so much more dramatic.
Posted by RAJ at 8:49 PM

Does this also applied to what the de facto regime is doing right now outside the brazilian embassy?

Actions by the regime seem to be exempt from all law, so I suspect we won't see this enforced on the pro-coup demonstrations.