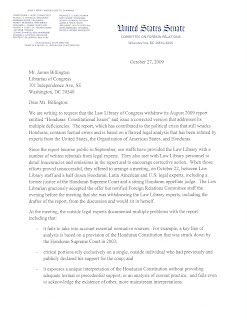 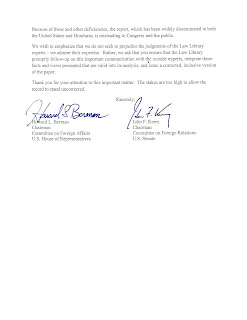 By now, it is old news to readers of this blog that the report, originally erroneously credited to the Congressional Research Service by the congressman who released it, actually produced by a researcher at the Law Library of the Library of Congress, asserting that the coup d'etat of June 28 was within Honduran law, has been refuted. Despite attempts by US scholars to request correction of this report, the Library of Congress has either refused to reply or ignored the substance of requests.

Well, now they have someone they need to answer to. Senator John Kerry, Chair of the Senate Foreign Relations Committee, and Representative Howard Berman, Chair of the corresponding committee in the House of Representatives, have written to Director James Billington of the Library of Congress requesting a correction. They make the same points first stated here. They also describe a pattern of interaction with the Law Library that sounds very familiar, in which despite the evidence, the library refuses to even acknowledge that its report is dangerously flawed.

In my teaching practice, I allow students a second chance to revise papers handed in, when the first draft shows good intentions and substantial evidence of work. While I am not sure I think this is an accurate assessment of the work of the Law Library, I am willing to extend the same courtesy to their essay, which I graded D-minus originally.

Maybe now they will take the chance offered and redeem themselves.
Posted by RAJ at 2:46 PM

The Law Librarian's refusal to concede and correct the "error" immediately seems like a case of a new director wanting to stand up for her staff. She was only appointed in August, just about exactly at the time that Gutierrez produced that hackwork for Rep. Schock.

But now she's made her pro forma stand (for a staffperson wholly unworthy of the effort). If after this letter she continues to be uncooperative with very senior members of Congress, she'll become one of the shortest-tenured LOC Law Librarians ever.

What provision are they saying it is based on?
Do you know what that letter is talking about?

I read the Report, and it is based and defended by many Articles of the Honduran Constitution.

The Law Library report has been extensively criticized. We provide the basic analysis of its flaws here and here. We provide notes on a letter by members of the Honduran Congress, directed to the US Congress, in which they make many of the same points, here.

Simply chanting the numbers of constitutional sections is not in fact good argumentation. Many parts of the constitution are cited in the law library report. The conclusions drawn go far beyond the constitution.

It is unclear to us what the question "What provision are they saying it is based on" means. But we surely do know what that letter is talking about-- and we invite you to read our commentaries, and then search for other writing here by Honduran legal scholar, professor of law, and member of Congress, Angel Edmundo Orellana. You should find your mind changed: legal scholars in the US, Spain, and Honduras are unanimous: the removal of President Zelaya on June 28 was unconstitutional.

Yes the researcher at the LLOC did a terrible job answering whether it was legal for the Honduran Supreme Court and Congress to remove him since she didn't even use Article-239 which states clearly that a citizen who has held the Executive Position(President) CAN NOT BE President. And HE who proposes to change this disposition along with anyone else who supports him or her shall CEASE IMMEDIATELY in the performance of their jobs and shall be REMOVED FROM THEIR OFFICE AND NOT HOLD ANY PUBLIC JOBS FOR 10 YEARS!

THERE IS NO PROBLEM with his removal or You all CAN'T READ!

Actually, we all can read. Article 239 is irrelevant for the following reasons:

(1) it was not cited by Congress in its Decreto on June 28 explaining its removal of the President from office.

(2) Article 239 does not apply because President Zelaya never advocated extension of his term in office, re-election, or changes to these specific aspects of the Constitution.

(3) Honduran law professors whose work we have posted numerous times, for example, here, note that Article 239 does not come into effect magically; there would need to be a legal finding that it applied, and no such legal finding happened.

So-- try reading some of these and the previous posts. And educate yourself about the actual events and the actions that led to this situation; you are simply repeating propaganda.