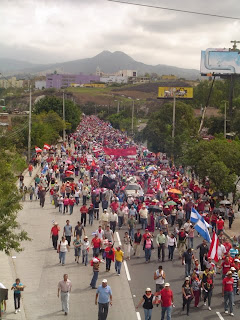 Manuel Zelaya Rosales went by car from the Brazilian embassy to Toncontin International Airport about 20 minutes ago and arrived at the airforce base there. He was accompanied by his wife, a daughter, Rasel Tomé and escorted by President Porfirio Lobo Sosa, fresh from his inauguration ceremony, President Colom of Guatemala, and President Fernandez of the Dominican Republic. At the same time, the other people within the Brazilian embassy who were Zelaya supporters left the embassy without incident, La Tribuna reported. At the airport was a large crowd organized by the Frente de Resistencia to see him off. Crowd photos showed that there were many thousand people gathered peacefully there. At the air force base the Zelayas and Tomé boarded a twin engine Embraer jet, which has just taken off for the Dominican Republic.

Update 4:21 pm PST: Zelaya has arrived in the Dominican Republic. La Tribuna reports that General Romeo Vasquez Velasquez was at the Airport to see Zelaya off. "Political phenomena are one thing, another is the friends you keep," Vasquez Velasquez told the press.

Thanks to our good friends in the Honduran anthropological and historical research community for the photo reproduced here of the long line of marchers headed to the airport to see Mel Zelaya off.
Posted by RNS at 1:42 PM

I thought Dona Xiomara pretty much told Vasquez to kiss off back on their joint appearance on Radio Globo in July. It was hard to understand, but excellent theater. He's played both sides of the fence and will end up impaled in the middle.